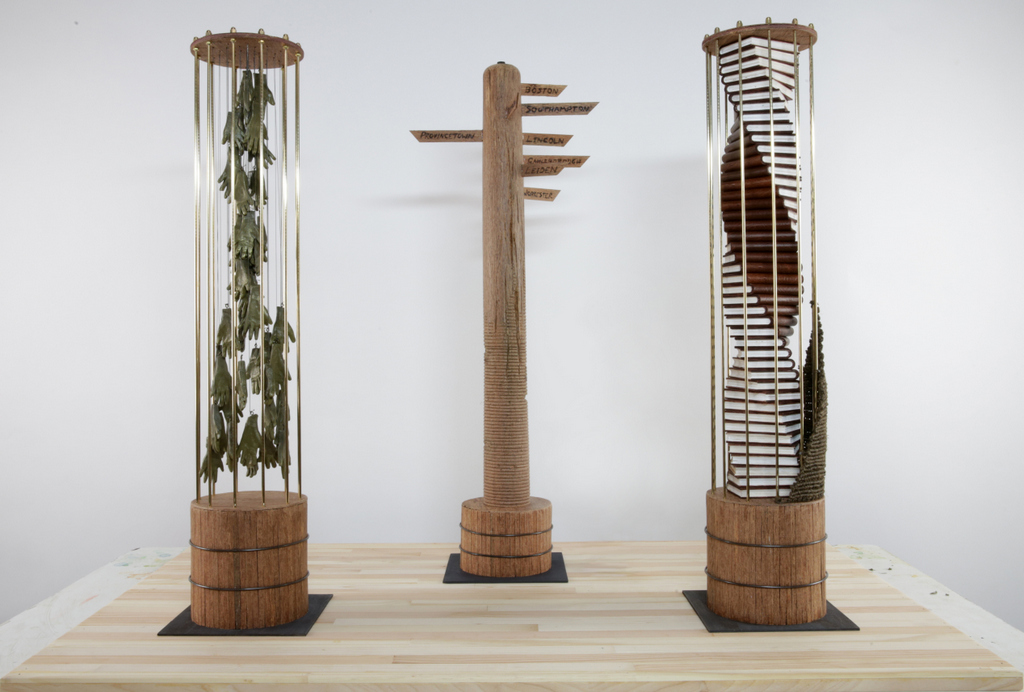 Since 2015 I started thinking about a sculpture that would encapsulate the history of the Mayflower and the Pilgrims who left England to America. I came up with many concepts and resided on making three pieces, each describing a different part of the story. Below you can see my proposal and photos of the maquette I created for this project. Even though the project did not come to light, I am pleased with what I have achieved.

If anyone reading this would like to show this maquette in their gallery to celebrate the Mayflower 2020 celebration please get in touch at ed@edwardcrumpton.com

The narrative and conceptual framework of the study

Three Masts is a triptych of sculpture maquettes that reveal the dynamic narrative of the great journey the Pilgrims went on when they lived in England and Holland. If I were going to make them full size, they would be approximately 3 meters tall. The mast-like sculptures are partly made from Teak, revealing the pilgrim’s imprisonment, persecution and near-death experience they faced before landing in America.

At the time, King James I made it illegal to print books in England and enforced the Church of England’s view of Christianity on the people of England. These restrictions caused friction amongst people who had their own different views and ideas, which resulted in separatists emerging, people like John Smyth and Richard Clyfton. In Mast 1 and 2 I have arranged twelve polished brass bars in a cylinder which refers to iron bars found in a prison symbolising the restrictions the King had over the Separatists. The metal used, polished brass shows the wealth of the King.

The Separatists congregation first began in Scrooby Manor, in Nottinghamshire, and found that their only option to express and live with their own views was to leave England for Amsterdam. When they first left England, their plan was routed and they were captured and imprisoned in Boston, Lincolnshire. To represent this imprisonment of the separatists I have cast peoples hands which hang down from inside the sculpture, Mast 1. This sculpture will have 40-50 cast hands and will be created from living descendants of Pilgrims. To me, this is an important way of bridging the gap between the past to the present in the work. It will also work as a means of bringing descendants together in the process of creating the living artwork.

Eventually, the Pilgrims were allowed to leave England and they sailed to Amsterdam, Holland. Whilst living in Leiden, three separatists William Brewster, Edward Winslow, and John Reynolds started a secret printing house. This entailed producing a number of books with political and religious meaning sniping the Kings authority. In time, this secret printing house was discovered by King James I and was destroyed a year before the separatists finally left for America. To tell this story I have made a second sculpture, Mast 2 which has books that spiral upwards to represent the shape of the screw from the printing press. Each book will be made from plywood and covered with a leather type material. The hand-knotted rope has been added to go around Mast 2 in the form of a sailing ship.

When the pilgrims left Plymouth for America there was a great storm and the main beam of the Mayflower cracked leaving the ship un-sailable. The story recounts how a great iron screw passengers had brought with them from Holland was used to support the damage to the beam. People believe this was part of the printing press which was used in Holland. The third sculpture will be made of Teak and show how the printing press screw was used to support the broken mast, saving their lives. At the top of Mast 3, there will be signposts showing the direction of where the various locations the separatists lived and worked in England.

In conclusion, I have always used journeys in my work as a catalyst to reveal the connection in the history of the past to the present. I find that these sculptures, Three Masts gives a visual interpretation of some of the Pilgrims stories for viewers to; question, learn and understand the difficulties they suffered at the time in their journey to freedom. 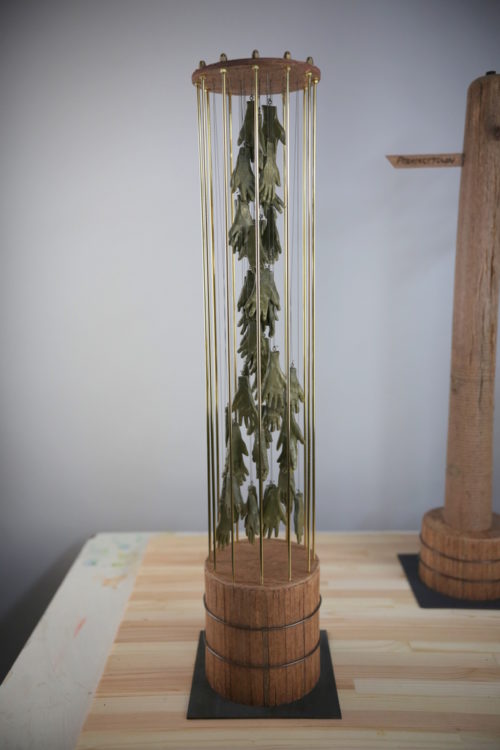 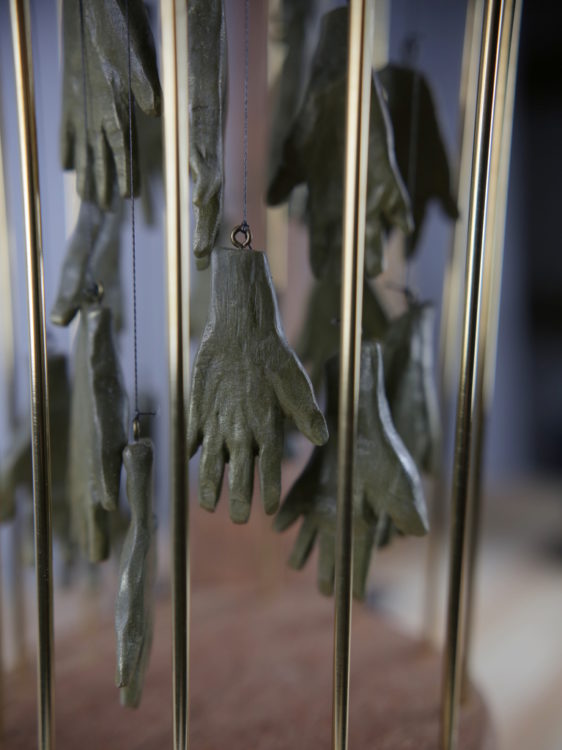 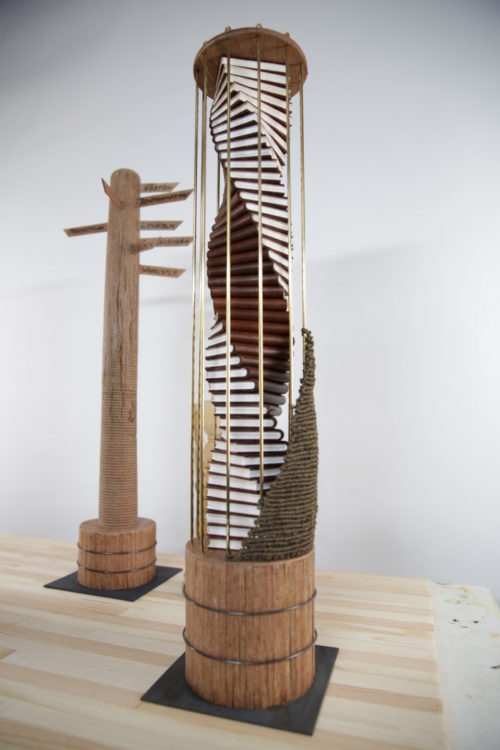 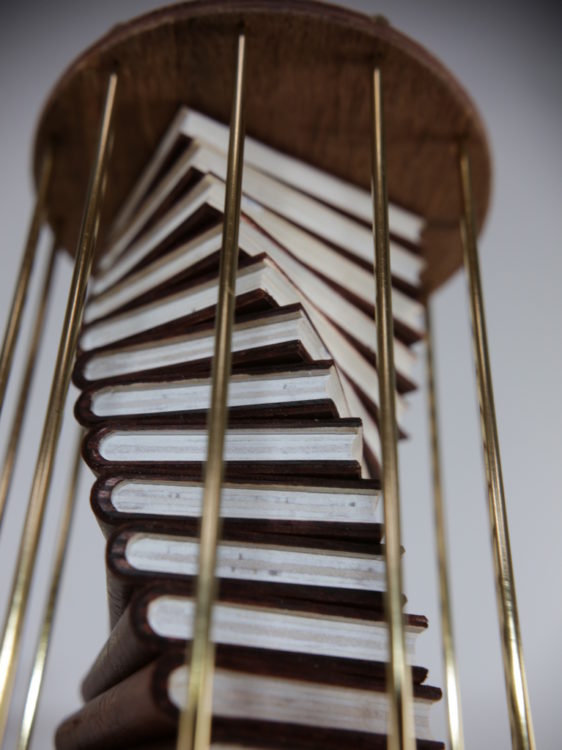 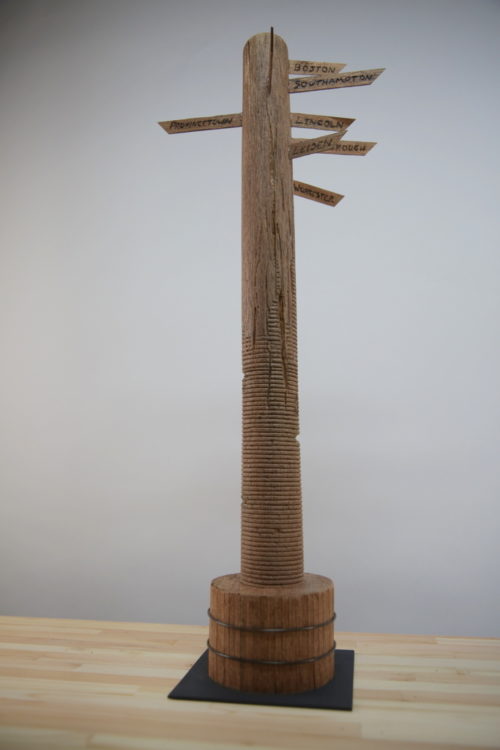 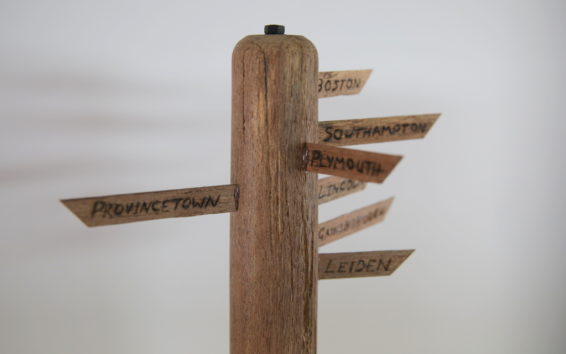