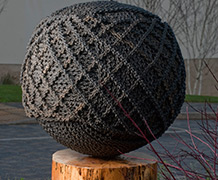 A Voyage of Transformation for Mariners Way Sculpture A new sculpture, ‘Mariners Way II’ made of contemporary materials in the form of a knotted rope sphere is now on display at the University of Exeter’s Streatham Campus.

Created by Devon-based artist Edward Crumpton, the sculpture is a memorial to an ancient walk across Devon, the Mariners’ Way.

It echoes an earlier spherical sculpture on Campus made by Crumpton that combined traditional materials, such as tarred marlin rope and an old technique of knotting, macramé. The previous sculpture Mariners Way, had a hand-made knot in the rope for each step along the Mariners Way walk, thus recreating the walk into a material object.

It was then reimagined by the artist in various manifestations, Crumpton said:“I always thought of carrying on the journey of the walk by transforming the rope into different objects. I see the knotted rope as a line; something one would draw with.”

The rope sculpture’s first change in shape was at Heathercombe Gardens Sculptural Trail in September 2013. Edward set about unravelling, hand-washing, dividing and re-knotting the rope into the form of a Passage House which stood right on the path of the Mariners Way, representing the houses along the route where sailors could find friendly, overnight rest.

The second reconfiguration of the sculpture took the form of a Marlin fish. This was the centrepiece of Edward’s 2013 solo exhibition, The Mariners Way at White Moose gallery in Barnstaple. This sculptural form played on the idea of the material of the rope, tarred marlin and integrated the concept of the marine environment.

Before returning the rope sculpture to the University in its original spherical shape, the materiality of sculpture had to be re-examined. Crumpton explained: “I wanted to use the authentic material for the sculpture that sailors would have used when making different decorative pieces of macramé, learnt from their travels around the world. However, having seen the effect of natural processes on the sculpture throughout 2012, it needed more durability, and to some extent sustainability. So for the sculpture to weather this outside environment I needed to source a new method and materials.”

During 2014 Edward investigated the traditional techniques of tarring rope and was able to re-create, through the application of extensive research, the first reformation of the sculpture, but this time using contemporary materials. He has named the new, 2015 sculpture, Mariners Way II, as a homage to the original sculpture and a symbolic reference of what the first sculpture encapsulated.

“Mariners Way II tells a story of Devon’s maritime history and creates a sense of place for our many visitors and students”, said Naome Glanville, Arts and Culture Co-ordinator at the University.

Mariners Way II can be viewed in the garden area next to the Northern Piazza, Stocker Road. It is one of around 40 sculptures on the Streatham Campus which can be viewed by the public from Monday to Friday, 9 am – 5pm. Some of the indoor sculptures may only be accessible in term times – however, the outdoor sculptures can be seen all year round.